What’s more fun than classiness on a West Village fall night? Classiness and chocolate. Of course, anyone acquainted with my favorite part of New York City is well aware that the quaint yet tremendously lively part of Greenwich by the Hudson boasts no shortage of elegant evening experiences. But equipped with my serious sugar bias, I have to say that Ayza Wine & Chocolate on 7th Avenue South has definitely been one of the most memorable food experiences of my village days thus far.

Part of it was probably being with some great company, but even if I had gone alone, I would have been irresistibly coaxed by the warm seductiveness of the Ayza ambience. The realest electric candles, the subtle yellow and orange color scheme, and the slick and narrow outdoor dining area illuminated by the welcoming but not too effusive car headlights makes Ayza socially first class and yet intimate.

We ordered a chocolate fountain with fruits and brownies (oh yeah, brownies dipped in a pool of rich chocolate sauce.  Diabetes on a fork right there, but hey, you only live once), New York cheesecake drizzled with chocolate sauce, and some special red wine. All of it just hit the spot.

But the highlight of Ayza was undoubtedly the discovering of serenity in a perfect downtown alcove.  Greenwich Village away from Washington Square Park is a relatively quiet part of the city to seek sanctuary, but at night, as life flares up again, it’s sometimes difficult to find that much-needed intimacy with yourself or a few others.

Ayza may not be the prime crowd retreat, but for smaller gatherings, dates, or even solo ventures, the wine and chocolate bar is a West Village gem that surely does not disappoint.

How good can vegetarian chili get? In my eighteen years of existence, nothing ever beat the gratifying wholesomeness of homemade soup with the freshest ingredients from the local farmer’s market and prepared with mom’s love.

Sorry mom…but I think someone has finally come pretty darn close. Don’t yell at me! Go to Amy’s Bread and see for yourself. It’s divine to say the least.

Located in three culturally vibrant areas in New York City- Hell’s Kitchen, Chelsea Market, and the one I frequent on a cozy street in the West Village- Amy’s Bread boasts the most incredible selection of hand-made breads, desserts, sandwiches, and delicious coffees, juices, and breakfast foods.

Eating at the Bleecker Street location in the Village which is just a couple blocks away from the Hudson feels like you’re living the greatest of downtown city dreams. A small and homey European café feel married to slick modern lighting and diverse wall art simulates one of the most comfortable eating experiences I’ve had to date in the city.

The first time I went to Amy’s, I was coming down with a terrible cold and wanted nothing more than a simple bowl of hot soup. When I ordered the vegetarian chili (which came in several different combinations…I’ve never seen so many options for a simple chili on any menu!), I thought I would get either the typical plain roll breadstick or “rustic roll” included with the order. Instead, I was presented with a mouth-watering array of at least ten different types of hand-made breads and was able to choose between the heartiest of flavors including black olive twist, tangy sourdough, and semolina with golden raisins and fennel. If my taste buds were functioning and I wasn’t so sick, I would’ve broke the bank right there and taken full loaves home. I felt like I was back at the Piazza Navona in Rome. I haven’t ever felt that café intrigue replicated in the States till I walked into Amy’s.

And the orange juice, oh the orange juice…the freshly squeezed citrus goodness transported me back to the beaches of Oahu. Chili, bread, and juice- what should be the most straightforward of meals was among the most heavenly I’ve ever had. To find that kind of pleasure in something so simple speaks volumes about the quality and devotion of Amy’s Bread to the greatest of dining experiences.

So, if you find yourself at any of the three aforementioned NYC locations, treat yourself to Amy’s Bread. It’s beyond worth it. 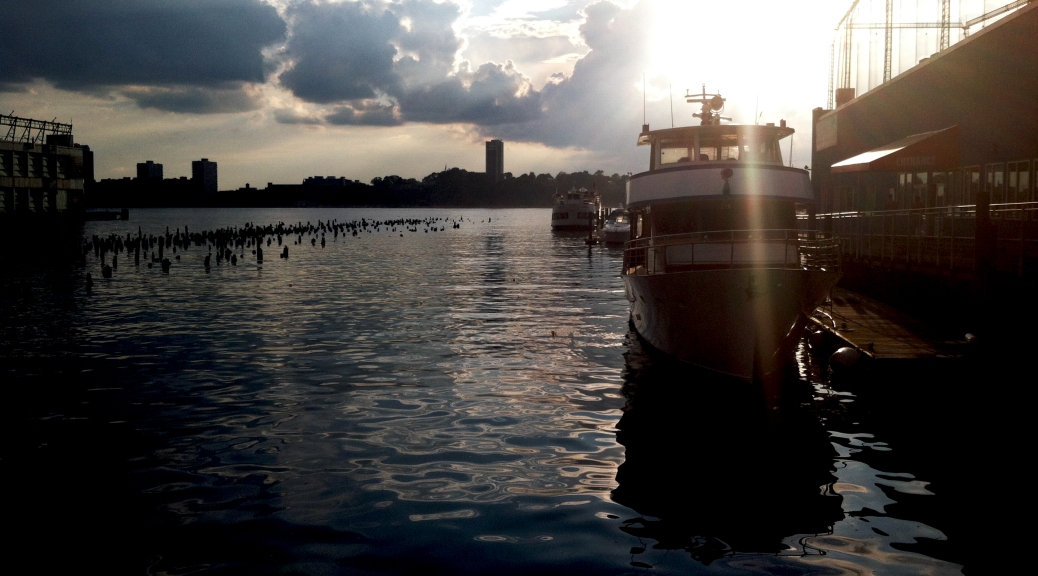 In several of my previous posts, I’ve detailed at length those ethereal, remarkable moments in my travels that have redefined for me the notion of beauty. Standing on top of the Temple of Poseidon as the sun set, hiking to the summit of Sugarloaf in Rio to be greeted by a panorama of city lights celebrating the spirit of life, admiring the Chicago skyline at night immersed in legendary rap…the locales have, for the most part, been distant and exotic. But yesterday, as I was walking back to my dorm located just a block away from the Hudson, I stopped in complete awe and for the hundredth time in my life told my self: “This is the most beautiful sight I have ever witnessed.”

The Hudson River is truly one of the most consistently striking landmarks I’ve seen. This is my second year in New York City, and I still find myself at the water’s harbors at least three or four times a week for its never-ending gift of experience. The Hudson is a continually metamorphosing entity. On one morning it grips the entire universe and its imagery of awakening in its dynamic strokes of water and air. It becomes a living spiritual relationship between human and city, city and nature, nature and infinite. That very afternoon, it becomes that helicopter shot from every single movie ever set in New York. The boats, the daytime city scape, the runners and the mothers and the mothers who are runners all embracing, whether consciously or not, their role in the fabric of a breathtaking cosmopolitan dream. And at night, the Hudson becomes the iconic dance of twinkling lights from every building in the greatest city on earth, all of it together reflecting off the serene waters below. The pattern becomes routine, after some time. But never unremarkable.

I’ve seen glorious Hudson sunsets many a time. But yesterday, as I stood on Greenwich Street in the West Village and saw the blazing red sun dangle between two restaurants and send fierce spears of light through the narrow streets in front of me, I was living magic. There was something so mesmerizing about the colors and movement of light that I didn’t understand. I had seen this so many times before. Why was it so overwhelming now?

And then, after pacing back and forth for almost half an hour and watching the sun rays propagate and diminish with my subtle motions, it hit me.  For the first time, I was seeing the sun set in the tightest linear space I had ever seen it from before. This massive ball of red, orange, and yellow was literally like a shot from the all-time greatest “Circle of Life” intro sequence in the Lion King. The sun was proportionally larger than everything else in view, consummating all of the New York in my vision with stripes of beautiful soft and punching hard light. I’ve never seen the sun like this, so immense, almighty, holding the entire world in its palms.

Yesterday, it was the most beautiful thing I’d ever seen. That perception will, undoubtedly, continually reconstruct itself the more I witness as I move. But what I took away from that spellbinding Hudson sunset was something more than the sight itself. It was knowing that an image I’d seen so many times, almost every single day, had suddenly on one random occasion become something else altogether. This wisdom is revelatory. I know that I can find renewed beauty in what has seemingly become mundane. As long as I keep looking and believing.