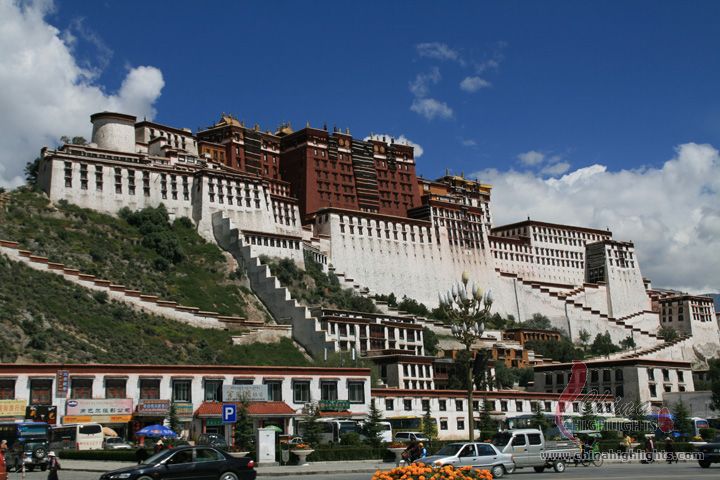 Who?  Anyone who is in Lhasa, Tibet

What? The Potala Palace, the winter palace of the Dalai Lama for many centuries is a UNESCO World Heritage Site.  It is also the highest palace in the world standing at 12,000 feet.

How? The Potala Palace is the most imposing structure in Lhasa and you can get there by taxi, walking or taking one of many guided tours.  Each day, only a limited number of visitors are allowed, so it is best to get your tickets ahead of time.  Since we wanted to understand Tibetan history, context and religion better, we hired a guide to take us in.

The palace is located at

Why?  Visiting the Potala Palace is such a physical and spiritual journey on so many levels.

– The altitude at which the palace is located makes it a physically challenging climb, but you are rewarded with some amazing vistas of Lhasa.

– It is of course a home of the Dalai Lama, someone whose smile and endurance we have known and followed.  A visit to one of his homes gives an inside peek at so many aspects of Tibetan life, duty and religion.

– The palace originally built as a gift from a king to his wife has over 1,000 rooms and is divided into the white and red palaces.  The lower white palace is the center of government and the upper red one is the center of religion.

– As you walk from room to room, there is a plethora of art and murals depicting Tibetan life, religion and history.

– There are many shrines in here and the tranquility felt is amazing.  Our special moment was when one of the monks at a shrine called out to us (We were the only ones he called!).  He proceeded to say that the Tibetans would always be friends with the Indians since the Dalai Lama now lived there and proceeded to offer special prayers ending with the ultimate blessing of white scarves that he placed around our necks.

– As my younger daughter put it, the visit to the Potala palace while enriching was bitter-sweet, especially since you can walk a space freely that the rightful owner can’t.