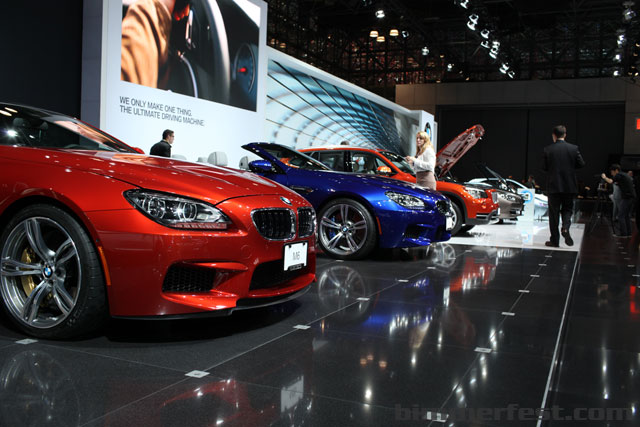 There are two kinds of people who attend the New York Auto Show. There are car experts who can tell you the make and model of a car from a simple description and there are people who don’t know the difference between a Ford Escort and a Ferrari Enzo. Luckily, the Jacob Javitz center in the heart of the Big Apple hosts a convention that suits both groups by providing a hands-on, interactive adventure through the automobile industry.

When you walk into the main convention hall, you are blown away by the sheer amount of “stuff” plastered everywhere. Giant car logos hang from the ceiling and shiny new models are scattered throughout the convention center. Each dealer usually has seven to eight cars on display and allow patrons to enter and take pictures inside their cars. This makes for a show that not only focuses on outer aesthetics, but also interior design. Hopping from car to car, I was surprised to see how different two identical looking cars are from the inside. Doing this for a few hours may seem boring, but the tremendous variety of cars you can find on the convention floors makes it feel more like an adventure and less like a chore to see everything.

The highlight of the event is definitely the Jeep Off-Road Challenge. This usually has a long line so we suggest that you hit this attraction first before you venture throughout the other exhibits. If you are under 18, a representative from Jeep will seat you in a Wrangler and take you on a simulated off road drive. The ride climaxes with a near vertical climb that the jeeps pull off with ease and a rapid descent back to earth. It feels like an off-road roller coaster and is definitely worth trying out. If you are over 18, you have the chance to try driving the jeep yourself!

Another must-see attraction at the convention is the vintage car exhibit. Contrary to popular belief, the New York Auto Show does not only house brand new cars! There are cars ranging from the first Model T to the new, shiny Camaros and Mustangs. As you walk through the Javitz center, pay attention for some of the “Hollywood” cars on display. When I went, the Dodge Charger from Fast Five was on display alongside the yellow Camaro used to portray Bumblebee in the Transformers movies. Relatives have told me in previous years, the famous Delorean from Back to the Future made an appearance.

Overall, the New York Auto Show is a splendid way to spend a day in the city. And with tickets at the door costing about ten bucks, what’s there to lose?

Check out the show’s website at http://www.autoshowny.com/ and make sure to catch the convention the next time it rolls into town!

Happy Friday! A throwback to another Friday spent in the smallest city in Wales - St. David’s.
This dish is known by a few names - Appe , Kuzhi paniyaram, and more. Fermented rice and lentil batter (idly or dosa batter) is spooned into a traditional brass vessel called a kaarai (this one is my grandma’s) and cooked with sesame oil till crunchy brown on the exterior. I filled some of them with freshly grated veggies and left some plain. So so good by itself or with sambar.
I’m always a sucker for good tacos and if a food truck is as inviting as this one, how can I resist? Check out the creative names too - Better Call Seoul, Let’s Avo-Cwtch (Cwtch is a loving cuddle in Welsh) 😄. Have a fave taco truck in your town?
This place checked off all the boxes to getting a rocking start to the day- delicious food, great service, and surprising design elements that made us smile. At The Cosy Club in Cardiff 😊
This Indian thali was a balm for the soul after an incredibly long day of hiking. Tasting so homemade, devoid of all the excessive oil featured in some restaurant meals, each dish tasting distinctive as it should, and totally worth the wait in line to get in! What are your fave places to indulge in a thali? And what leaves you disappointed?
A hike that we have been fortunate to do multiple times, a path that never fails to take my breath away (and blow my hair to new places), a place that remains devoid of tourists most of the time, and a spot that I long to keep returning to. St. David’s Head, Pembrokeshire, a spot so worth visiting.
Loading Comments...
%d bloggers like this: