These pictures were taken during a Spring day trip to the pyramids.  You can also read more about our visit at http://pauperswithouttravel.com/2012/11/15/the-great-pyramids-of-giza-simply-memorable/ 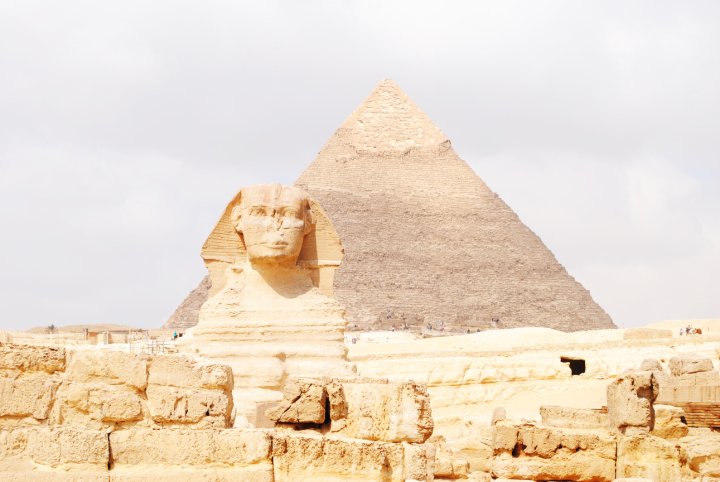 Here are the top 3 reasons why we had to see the Great Pyramids of Giza.

– It is one of the seven wonders of the ancient world.

– We had to make our academic learnings on one of the world’s oldest civilizations come to life.

– (Ok….don’t laugh on this one) A recent Hindi movie had an incredibly romantic song filmed against the backdrop of the pyramids

So, how did we do this?  We dedicated a day to covering the Pyramids and the Sphinx. Since we wanted to take our time and also delve into  the history deeper, we arranged with our hotel for a car with a driver and an Egyptologist to take us there.  The one big benefit of this arrangement was the ability to bypass the long lines and ensure that we got tickets to go inside the pyramids as well.

Set against the backdrop of a desert 30 minutes from Cairo, the pyramids feel almost unreal and mythical.  As you set eyes on them for the first time, you go through a mixture of emotions.  You are awestruck, humbled, amazed and simply feel blessed for the privilege of standing in front of them.  And as you turn and watch Cairo city encroaching closer to the pyramids, you think back in time when Giza was simply a world away from civilization.  A place where the great rulers decided to build their final resting spots.

2.3 million limestone blocks were cut and assembled to build the Great Pyramid which is the resting place for  the fourth dynasty pharaoh Khufu.  We were fortunate to be able to enter the pyramid.  As expected, the pyramids are dark and it feels surreal as you walk in the dimly lit, sharply ascending space, making your way to the top.  We walked around the narrow spaces and landed where the sarcophagus was.  Even though all of the treasures are long gone thanks to looting, you can visualize the sanctity and importance of this place.

Once we had seen all three pyramids up close, we drove a distance to look at them from a different vantage point.  We clicked a popular picture of each of us appearing to touch the tip of the pyramids and  then took a camel ride.  Sitting on a camel for the first time was a bit nerve-wracking and weird. And when the camel shook, I held on to it for dear life and marvelled at the advances in science that appeared to exist close to 5000 years ago.

After the camel ride, we went to see the Sphinx, one of the largest monolith statues in the world.  It was majestic.

So, how would I best summarize our feelings about this visit?  I am simply going to steal the words of Carl Hoffman who wrote eloquently in National Geographic , “To visit the Pyramids is to be struck dumb by their monumentality.”

If you would like to take a virtual tour of the pyramids, please take a look at this NOVA/PBS site:

This article on the Sphinx built our anticipation and excitement for our visit:

One gorgeous sunset in Madrid captured from three different angles. Breathtaking for sure!
It’s the kind of travel I love. Just walk with no agenda in mind and pause to appreciate the beautiful sights and music that come your way.
I absolutely adore train travel. Here’s a tale of two train stations. The first one in Madrid - filled with greenery and felt so tranquil as we boarded the train to Barcelona. The second - The crowds we had to stand with as our train was delayed by five hours in Barcelona (standing room only and people watching galore). Still a beautiful way to travel. How about you? Do you like to travel long distance on trains?
Doors - A visual that always intrigues me for the mysteries they hold beyond. Like Dublin, loved the many many varieties of doors that presented themselves across Madrid.
No filters needed. I took a turn and saw this sight at Parc Guell in Barcelona and it just felt like a painting or the perfect postcard. Isn’t it spectacular?
Beach times are always happy times.
Loading Comments...
%d bloggers like this: