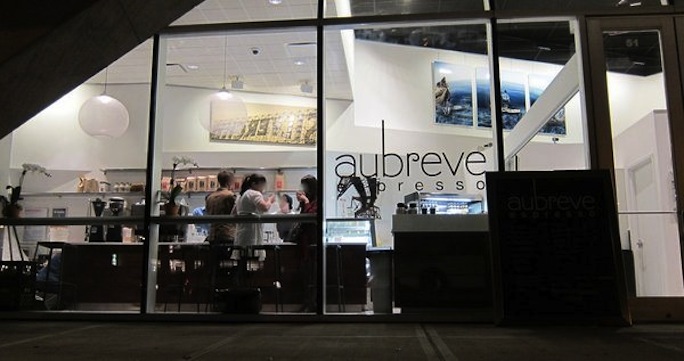 Though the high school population will shoo me away grudgingly when I say that college eight AMs are killer, they really just are the worst. Especially when your dorm and class are on opposite sides of the Village and every part of your body rattles under those cruel mid-October chills. But when you get your hands on the right cup of coffee on those unfortunate mornings (trying to be as dramatic as possible here…), everything becomes infinitely more bearable.

This morning, I discovered Au Breve Espresso tucked away in the early morning sunshine of Cooper Square in the East Village. Located adjacent to an arts preschool in the new Cooper Union building, the small but wonderfully slick designed coffee joint is a proud adopter of an initiative called the “Progressive Coffee Program”, which strives to sample the top  brews across the globe and deliver the best flavors on a seasonal basis. Which means that unlike most mainstream coffee companies that simply change the syrups of the same brews to market “new” beverages with season shifts, Au Breve actually changes what they brew throughout the course of the year. The bean origins are standout:

Though my staple cappuccino order was smaller than I expected, coming in a lot tinier than what I thought their standard six ounce serving size would look like, it was simply divine.  The last time I had coffee that felt this great and satisfied my morning caffeine fix so thoroughly was at a cafe in Rome several years ago. That sentiment was fitting, considering Au Breve’s international bean outreach. In addition to its unique brews including Woodneck, Aeropress, V60, and Kalita, the coffee shop boasts a selection of breakfast pastries and post-meal desserts like macaroons and their signature rainbow marshmallows.

The real surprise on the menu? A masala chai latte! I haven’t tried it yet, but I know that I’ll absolutely be back to see if they do justice to the spices. I have faith.

Au Breve is a bit pricy considering the amount of coffee you actually get, but what you spend is nonetheless worth it. This is coffee that you can safely say was the highlight of your day, which is a big deal when you’re in Greenwich Village!

Au Breve Espresso is located between between 6th and 7th street at 51 Cooper Square, New York, NY 10003. The cafe is oddly closed on Saturdays and open on Sundays, so the best time to grab a cup off your favorite coffee is an early weekday morning when the crowds are minimal despite Cooper Union and NYU students being out and about.

To learn more about Au Breve and explore more of their offerings, click here: