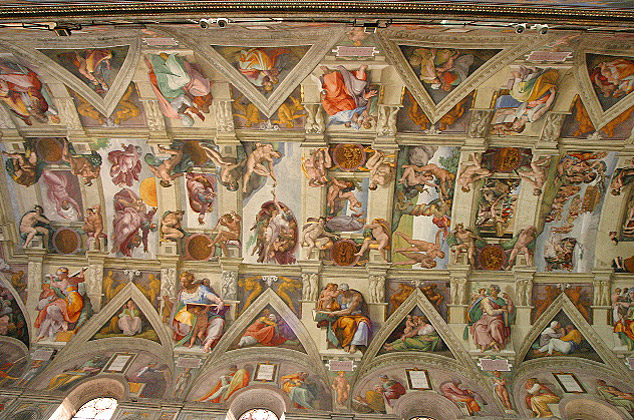 A few years ago, I picked up a non-fiction book that was receiving rave reviews.  Written beautifully by Ross King, “Michelangelo and the Pope’s Ceiling” recounted the four-year turmoil that Michelangelo underwent in the journey to painting the ceiling of the Sistine Chapel.  A sculptor who did not like to paint, the book certainly was an absolutely vivid flashback to the political motivations, religious sentiment and king sized egos and rivalries that prevailed at the time.  I was amazed and disappointed that after years of reading travel articles and essays on this masterpiece, I had never actually seen it.  So, on our trip to Rome, like many a tourist, seeing “THE” ceiling was literally the first thing we wanted to do.

The Vatican is not simply a seat of religion with significant influence, it certainly rivals many an art museum with its absolutely stellar collection.  Zillions of lines of prose and many megabytes of images have been dedicated to capturing the rich trove of treasures held by the smallest country in the world.  And as you wind your way through the Sistine Chapel, you pass the doors to a dimly lit space with throngs of visitors and police and you know that you have arrived in a special place.

As we craned our neck upwards, it was an overwhelming sensation to see approximately 5,000 square feet of Michelangelo’s greatest work stare down upon you.  Scenes from the Book of Genesis ranging from the creation to the fall were painted so naturally and in the most brilliant hues.  As we scanned the entire ceiling and tried to take in one scene at a time, there were throngs of people trying to push us along.  The reactions from other tourists spanned from a brief acknowledgement of checking a must do on their bucket list to hysteria on actually seeing this much touted piece of art live.

As a fledgling wanna be artist and designer who can barely get a design in her head on to paper without many iterations, I was completely floored by how someone who did not even have a natural proclivity to painting could have created these drawings and frescoed them with such detail.  As we spotted the most famous of the frescoes, The Creation of Man, we were just stunned to silence.  We got moments to take in and admire what a man and his team labored for years to create.  Hours of painting with the wrong composition of materials to find that the frescoes would not hold up.  And then painstakingly going at it all over again and tweaking along the way.  It was the ultimate “on the job” learning! We all have work challenges of tight budgets, demanding constituents and rivalry with others.  The creation of the ceiling embodied all these elements and more.

Seeing the ceiling after reading about it would have been a treat in itself.  But reading the journey to its creation by Ross King certainly made me appreciate what I was beholding so much more.  It felt like I had taken a journey through all the nuances of its creation first hand and then got the ultimate prize to see it live.  And as Goethe put it, “Without having seen the Sistine Chapel one can form no appreciable idea of what one man is capable of achieving.”

To see the ceiling of the Sistine Chapel virtually, click here:

Phyllo cigars stuffed with almonds. pistachios, sugar, lemon zest, shallow fried, dunked in honey and topped with more pistachios. What a discovery from the #jerusalem cookbook by @ottolenghi 😊😋
Another pizza in the making!
Zatar and Thyme pizza with garlic olive oil ready to stick in the oven.
@maneetchauhan - You inspired, I followed. Take one on making Bombay Ice Halwa at home. Will not know till it refrigerates till tomorrow if I really nailed it. But looks and smells so good. My mom does not want to sleep till she takes a bite! Recipe from Maneet’s book Chaat.
Happy Monday! Just some paneer, peppers, and tomatoes roasted on skewers and topped with some salt and chaat masala.
To all those who celebrate, hope you had a good Easter. It’s a gorgeous day for sure in our neck of the woods.
%d bloggers like this: