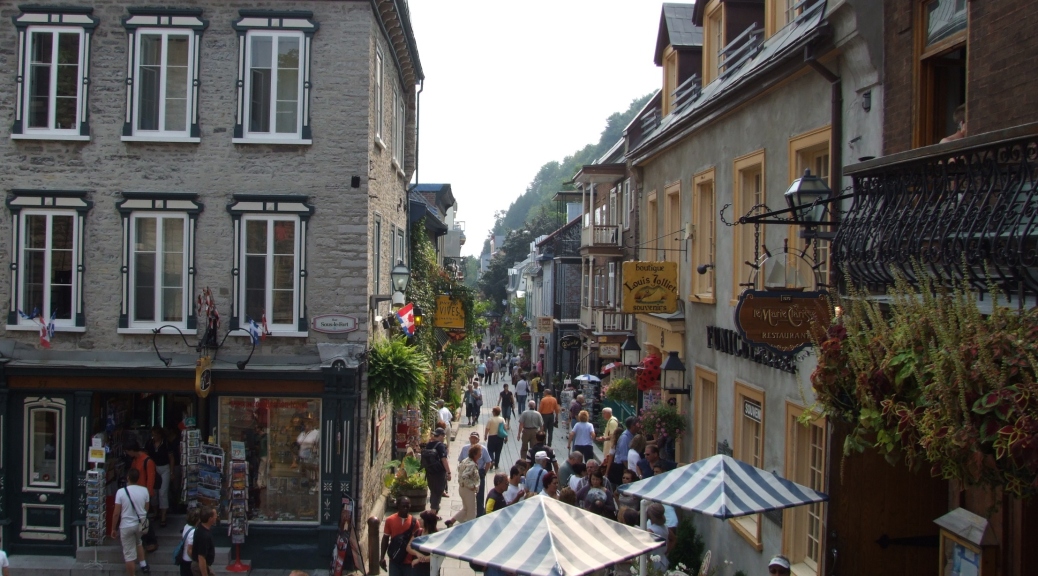 We checked into our little hotel in Montreal, thinking there was so much to do and see that we could never imagine conquering it all. Next to us was a family buying train tickets to see Quebec, a city that I thought was similar to Montreal in architecture and culture. I could not have been more wrong. As the day progressed, I noticed more people following in that family’s footsteps and buying their tickets to the city. So as flexible travelers, we decided to see what the big deal was about Quebec.

Our trained pulled into the station on a bright Sunday morning and the lines for the train station coffee shop were already beginning to form. We grabbed our bags from the compartment above us and double-checked to make sure we had our return ticket. Since we only had a day in Quebec and no prior knowledge of any of the attractions, we just decided to wing it. We told the cab driver to take us “downtown” so we could at least get a sense of what this city looked like. The drive was picturesque to say the least. To our right, there was a sparkling river with everything from fishing boats to cruise ships filing in and out. To our left was… a wall?

Quebec was designed by the French to serve as a city rich in art and ideas but also for protection during battles like the French and Indian War. It’s a unique city, boasting a fortified wall that stretches endlessly and several cannons and turrets perched overhead.

As we entered the main city, we noticed the roads began to become steeper and bumpier. We’re not talking asphalt. We’re talking cobblestone. Seventeenth century cobblestone designed for horses to be exact. The cab driver looks in the rearview mirror and grins.

After a long nap on the train, I was able to churn out enough energy to nod. The anticipation was building and the sights became more and more inspiring. Busy streets turned into quiet alleys with boutique stores and coffee shops. Modern skyscrapers began to blend into impressive fortresses. Topping it all off was the Chateau Frontenac, a building that is considered to be one of the most beautiful hotels in North America. And boy does it live up to that title! It looks like a palace with strong brick walls, gothic architecture, and Disneyland-like spires. Walk inside and you are treated to furniture from the 18th century, stunning glass chandeliers, and beautiful works of art like the real oil paintings in the lobby.

Exit the hotel and you are at the highest point of Quebec. Here, you can take a funicular to all the shops and restaurants or just kick back, grab a cold drink, and enjoy the view! There are remnants of old battle stations you can explore, making everywhere you look seem special. If you’re in Quebec, I highly recommend first taking a taxi to the Frontenac and then working your way downhill, literally eating through the bakeries and pastry shops as you make your way to the surface. It’s the perfect way to spend a day in French-inspired heaven.

Sunset in New York City
Me, my girl, and Van Gogh = a perfect evening 💕
Wholesome good for you food. Steamed rice served with onion and pepper sambar (lentil stew), cabbage thoran (finely chopped cabbage with spices and fresh coconut), buttermilk with salt and cumin, papad, and puli inji (tamarind and ginger condiment). Hit all the right notes.
A welcoming South Indian lunch 😋
If you like salty, sweet, spicy, gingery, then this delicacy Puli Inji aka tamarind ginger is for you. I picked up a huge batch of organic ginger at @costco and decided to make this condiment which is perfect on a 90 degree summer day with cooling yogurt rice, or with dosas, or with pretty much anything you choose. And it stays for many many days.
Childhood summer memories recreated. Guava with salt and chili powder. Anyone else love this combo?
%d bloggers like this: