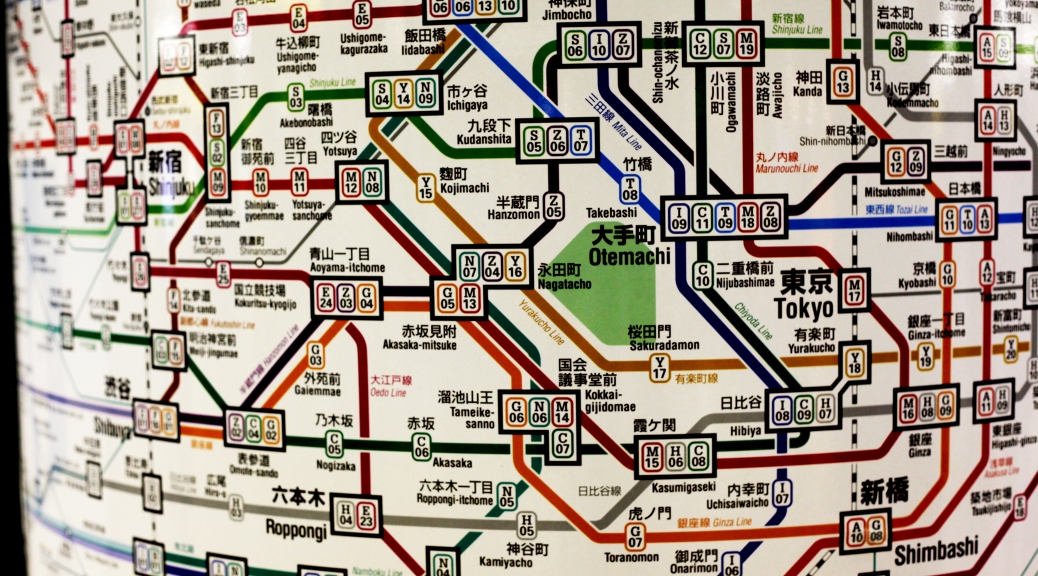 One of the Paupers’ favorite ways to explore a city is hopping onto a subway or tram system with a map and traveling the way the locals do.   It is an approach we have taken in almost every city we have visited because it allows us to experience the adrenaline of discovering a new place while simultaneously blending into the social landscape of the culture we have entered.   Seeing while belonging.

So, when we were in Tokyo over winter break, there was no question in terms of how we would navigate the incredible city.  Here’s how we covered downtown Tokyo in a day via one of the world’s most expansive and efficient subway systems:

We took the Asakusa Line from Shimbashi (where our hotel was) to the great Asakusa itself, home of the famous Sensō-ji temple that honors the bodhisattva Kannon (also known as The Goddess Of Mercy).  The story behind the statue of the Kannon is as follows: two brothers who were fishermen went out to sea one day when they found a statue in the waters of the Sumida River which flows through Tokyo.  They ignored the statue the first time.  But when they encountered it again, they knew it had to be a sign.  So the statue was taken out of the water and a temple was constructed in Asakusa so that people could worship the Kannon.  The path to the actual temple is a famous street market called Nakamise-dōri. It has every Japanese cultural memento you could possibly imagine from traditional fans and clothing to Pokemon plush toys and unique ice cream stalls. The site reminded me of a scaled down and less frenetic version of the Khan el–Khalili  market in Cairo.

The temple itself was a fairly low-key experience (that isn’t to undermine the site, it is a must-see in Tokyo.  By “low-key”, I am referring to the experience itself being a modest one).  A few elements of visiting Asakusa really stood out, especially witnessing people lighting incense sticks and put them into a common standing pit, as they waved the resulting smoke towards themselves.  This act is believed to be a way of cleansing yourself of any pain or illness.   The scent of the incense and the  image of a spiritual rite of sorts coming together formed an indelible impression in my memory of the serenity of Japan’s people and their faith.   Inside the actual temple, visitors can donate 100 yen to get Omikuji, fortunes written on pieces of paper at Shinto shrines.  You randomly choose a fortune from one of many, many boxes, and hope for the best. My sister’s fortune said she would be diseased.  We all laughed (no, we’re not evil!)

After roaming around the area surrounding Asakusa for a bit and soaking in Tokyo street culture, we hopped back on the subway (on the Ginza line) and travelled to Ueno, a city hotspot populated with museums and temples. We walked around another large street market area and played in a Japanese arcade (you can’t come to Tokyo and not immerse yourself in some gaming!) before heading over to Ueno Park, which is essentially the Tokyo equivalent of Central Park in New York City.   The park is so incredibly well-maintained and hosts an abundance of cultural and recreational sites.  The walk through Ueno was peaceful and beautiful, embodying the spirit of what Tokyo and Japan as a whole stand for.  I have been in several public parks throughout my travels, but Ueno is definitely near the top of my list next to Vondelpark in Amsterdam.  There is a transportive sensation you get in places like this that are just unparalleled in their tranquility.

Once we had taken in the wonders of Ueno, we took a lunch break in a restaurant near the park.

Next, we took the JR Yamanote line from Ueno to the Tokyo Imperial Palace, home of the Emperor of Japan.  The park that leads up to the palace is stunning. Absolutely stunning.  The trees reminded me so much of the beauty I felt watchingTree Of Life, and I can only imagine what it would be like to live so close to the place.  I envied every single runner jogging around the Imperial Palace (which I learned is a major recreational place for athletes) and wanted oh so badly to just put on my running shoes and do the same.  What a place to take in the natural imagery and enjoy the fresh air.   Unfortunately, you can’t get too close to the actual palace as it is gated off, but the moat and bridges surrounding it are gorgeous.  The highlight of being here was undoubtedly the unforgettable scenery, which just further bolstered our respect for the Japanese architectural and landscape aesthetics.

That was our exploration of downtown Tokyo in a single day.  We obviously only scraped the surface of the city during these hours, and filled in the gaps during our subsequent days in the city, but still felt our subway hop-on/hop-off approach allowed us to see a lot in just one day!

Let us know if you have done similar, self-guided day tours of Tokyo or have any suggestions for future visits!

One thought on “Downtown Tokyo in a Day: Subway Hopping”

Let’s play board games, shall we? Inspired by the numerous food boards being created, I decided to make one with the ingredients at hand. Starting with a base of greek yogurt, layering on roasted sweet potatoes, adding on avocados, coriander/date chutneys and finishing with cilantro leaves, tomatoes, green chilies, lemon juice, chaat masala, and sev. It was a sure hit way to brighten up a dreary day.
Ending 2022 with another great meal - this time at Bavel in Los Angeles! Missing from the pic, my beautiful date, @siddhithesundar 💕
Valparaiso - A hidden gem of a city in Chile. I’ve been reading about the beauty of this city for some time now and it was a super fun place to be in. Everywhere you looked, there was some thing beautiful to take in.
Besides seeing sights that cannot be described well enough with any superlatives in the English language, it’s the people I met who made this trip extra special.
Seven Done - No words to express my gratitude 🙏
Why do I always have vacation pictures with hair gone wild?!?!
%d bloggers like this: